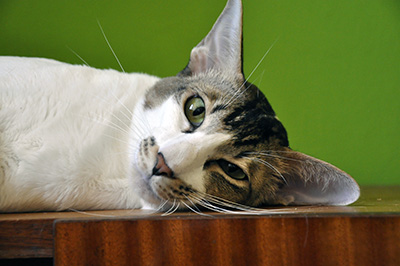 A-A is just “A-A” without any other nicknames. His nickname comes from his own meows, as he has never really made any other sounds than “A” or “A-A”. I think we have never heard him meowing like a real male.

A-A is from our own breeding, from the last litter of our OLH Warre. He has sired few litters already to our cattery and his offspring has shown a lot promise. He has short coat, very good green eye color and excellent coloring and character. He welcomes ladies to his kingdom with a smile on his face.

A-A gained his JW title from shows and in his first show as an adult he was BOB-2. He also have gotten his NW and SC titles as well as DSM title. He might occasionally pop in shows, but we’ll restart with him better after he has been neutered.

More pics of our Blackrock can be found from his Facebook gallery.